The basic scraper is a piece of metal, sharpened on the edges and held in the hand or in some sort of stock that creates a fence. That’s it.

At its worst, the scraper is a hard to sharpen, hard to hold hand numbing nuisance that creates a fuzzy surface. At its best it’s a chisel, gouge, molding plane and smoothing plane all in one. For a tool with zero moving parts, it can do a lot. 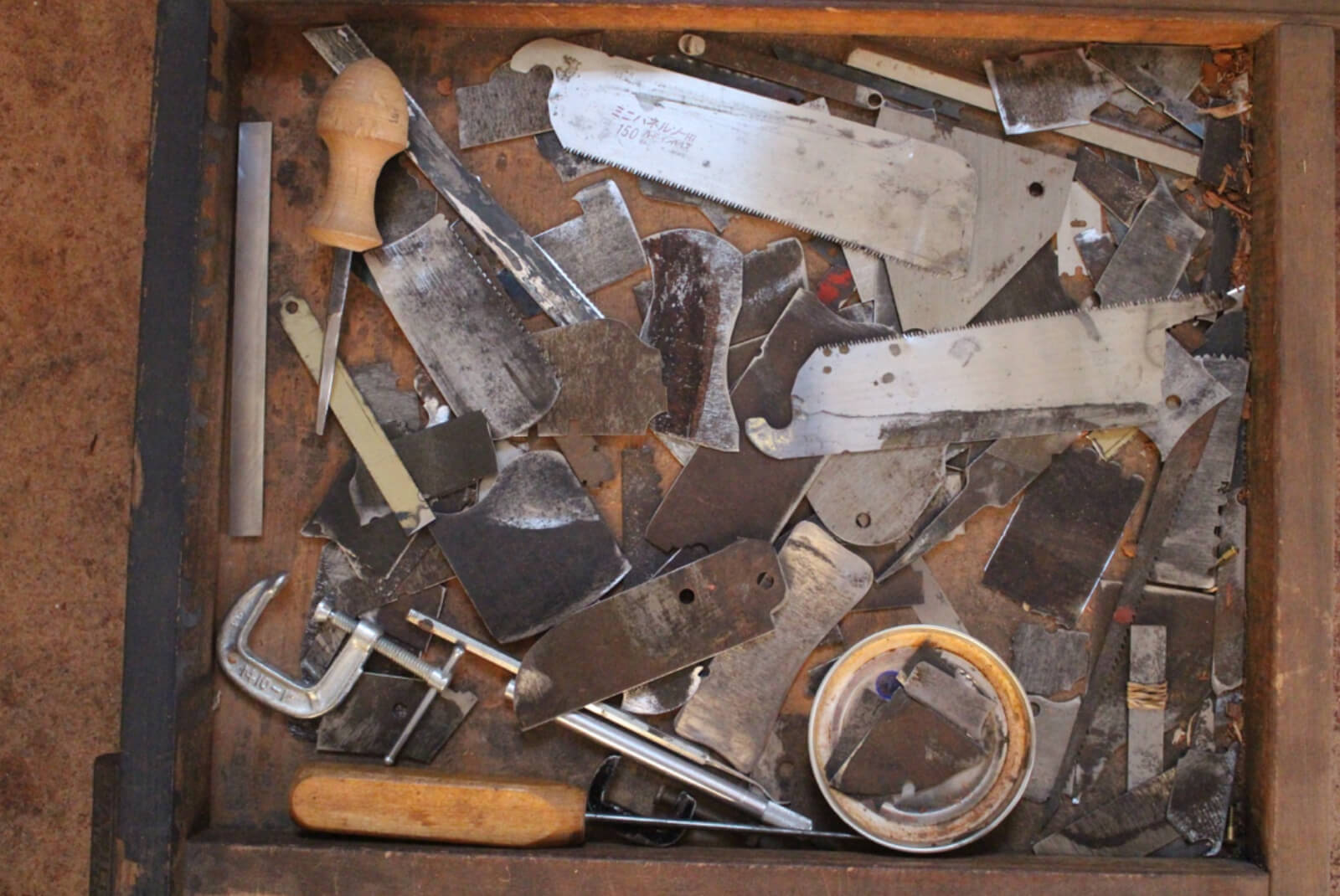 I have even been known to buy new ones. You can get some nice thin ones that are great for scraping little strips of mahogany that have torn out after hand planing. The steel has to be hard enough to take a burr but not so hard that it can’t be filed. What I like in a scraper is some spring to store a little energy as you’re pushing it. A scraper that’s too thick can’t do this and will just chatter and make you swear and throw things. These are made from old saw blades. The rounded ones are for smoothing legs and feet and the others are for stop-fluting legs. 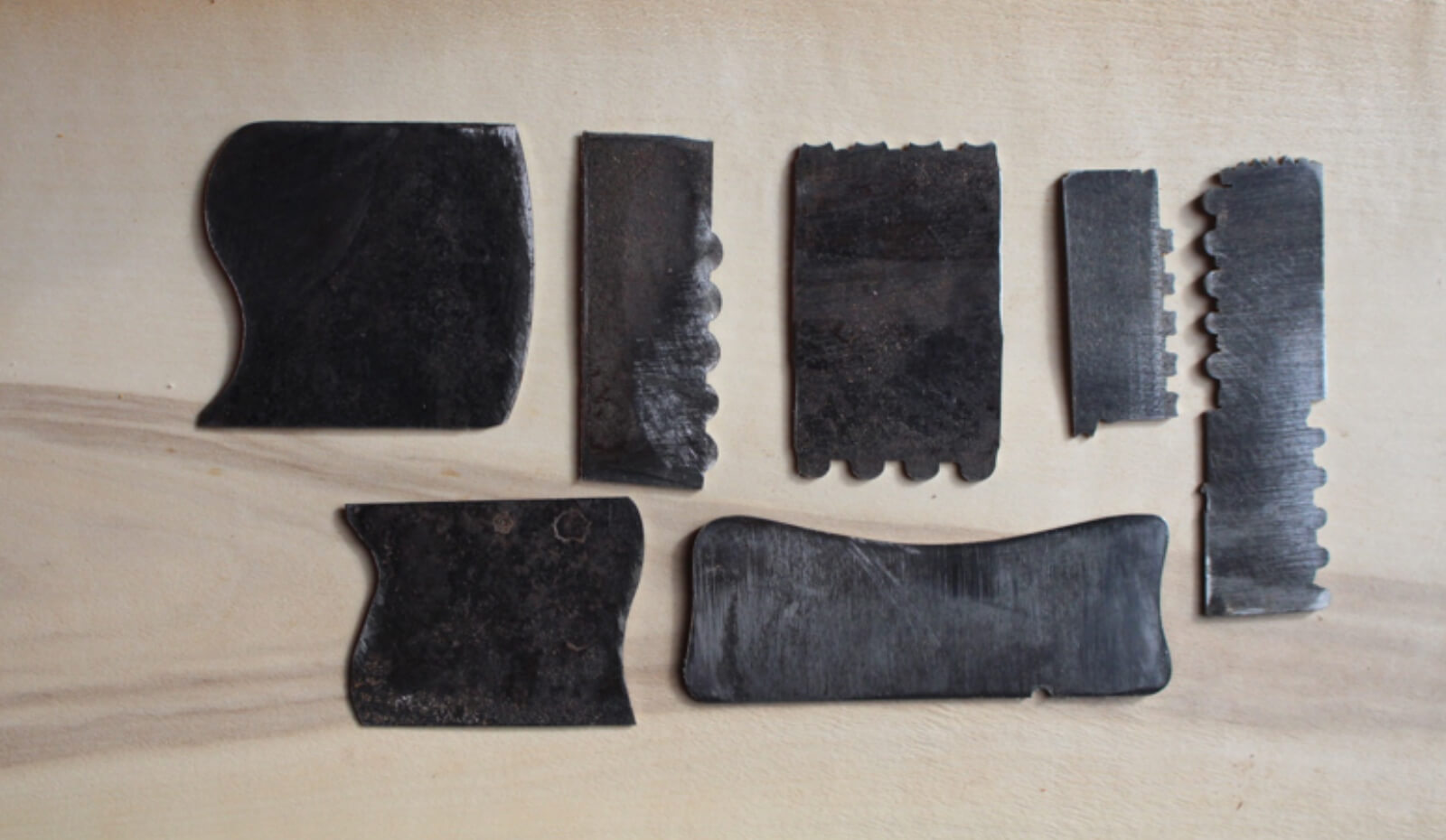 The thick ones are good for a two handled scraper- I have an old Stanley that I use for scraping down bench tops, and that’s about all I use it for. 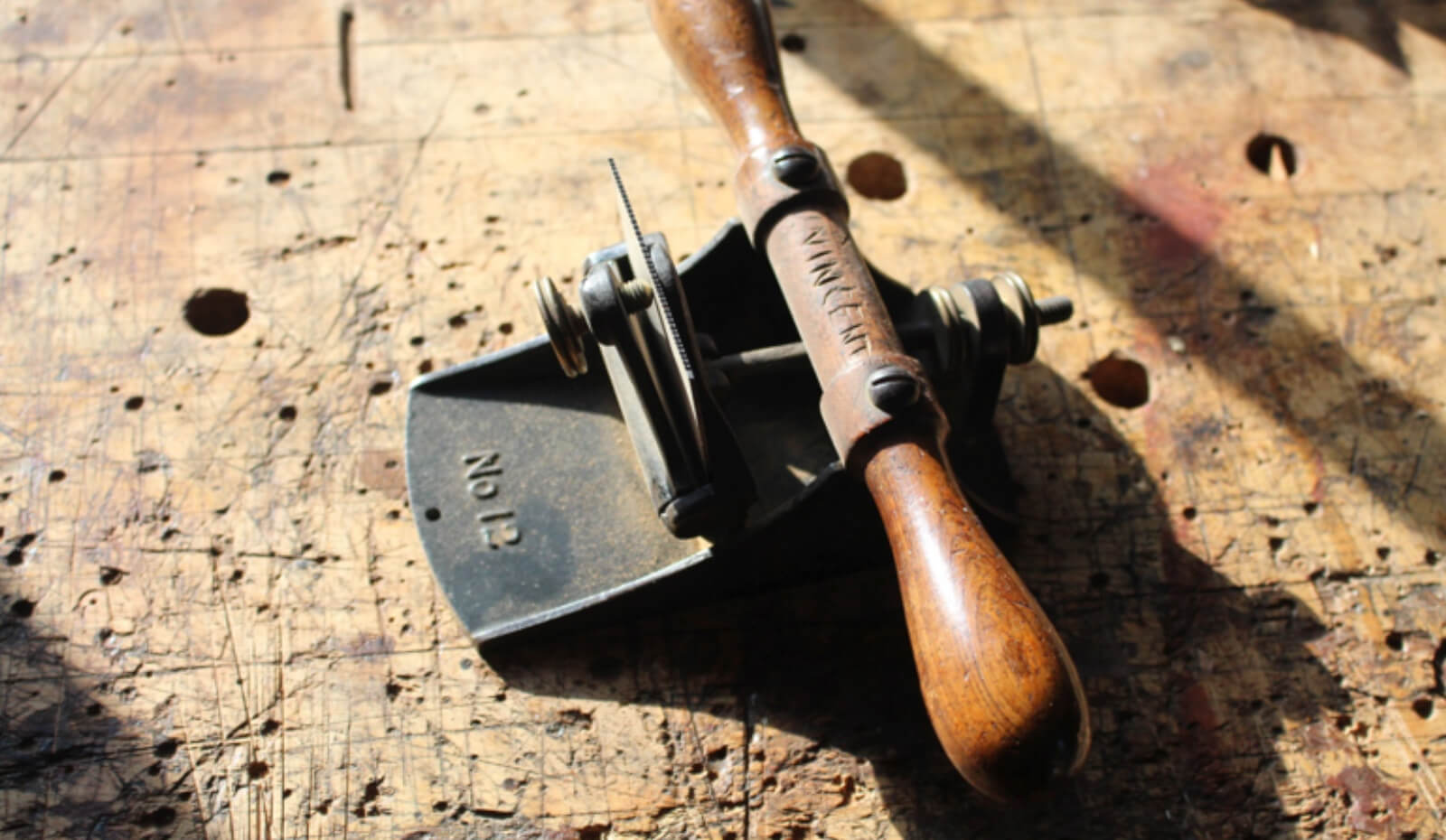 I’ve been working on some shield-back chairs recently and began to think about how much I use scrapers. To put the molding on the shield itself, I filed the molding profile on a free part of a standard blade. I find chainsaw files and needle files are great for this type of customizing. I put the blade in a scratch stock and scraped out the shield molding except for the parts to be carved. 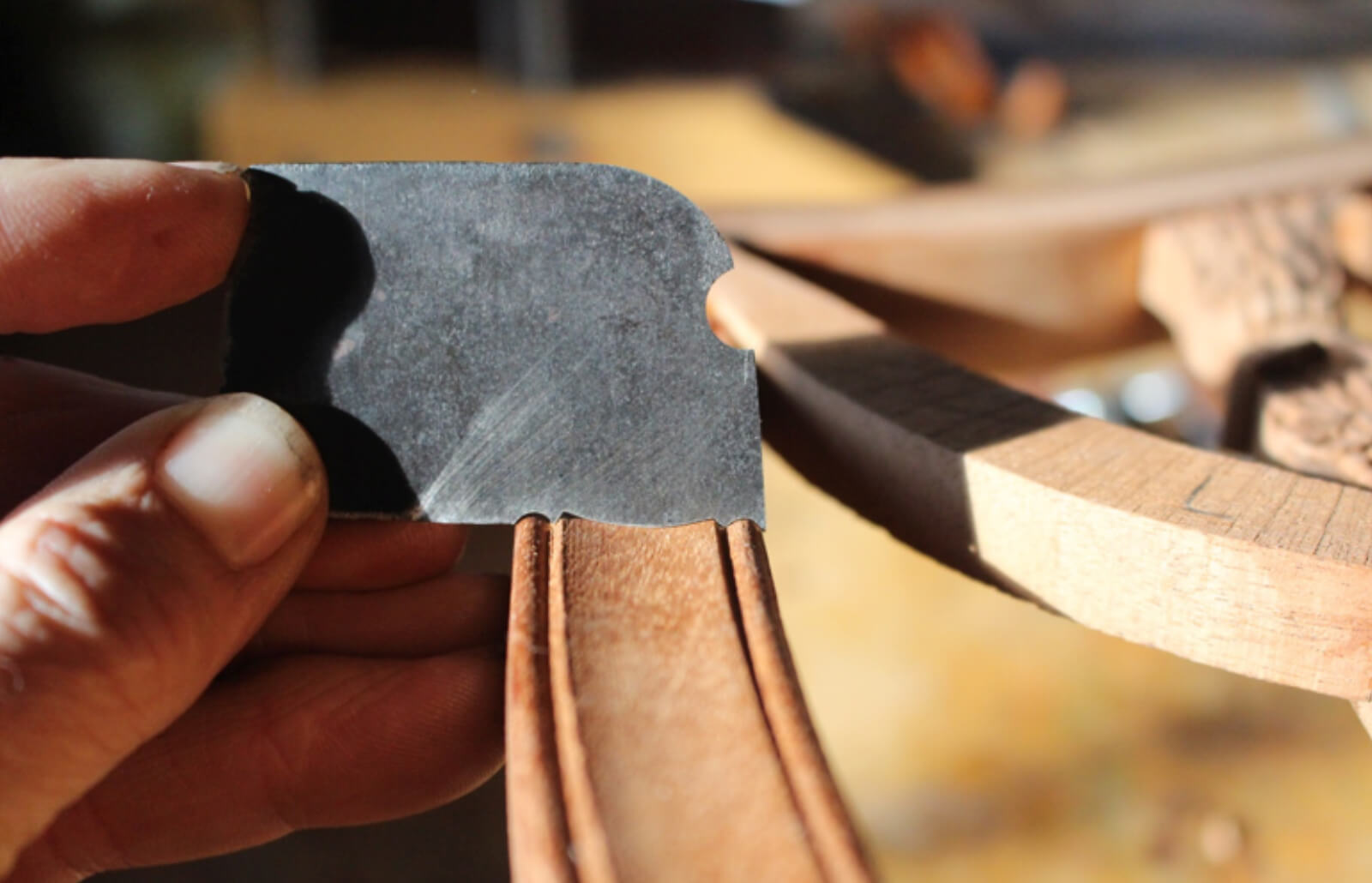 This blade was held in a scratch stock to do the actual work. The scratch stock is just an L shaped block with a kerf in it that the blade is clamped into. 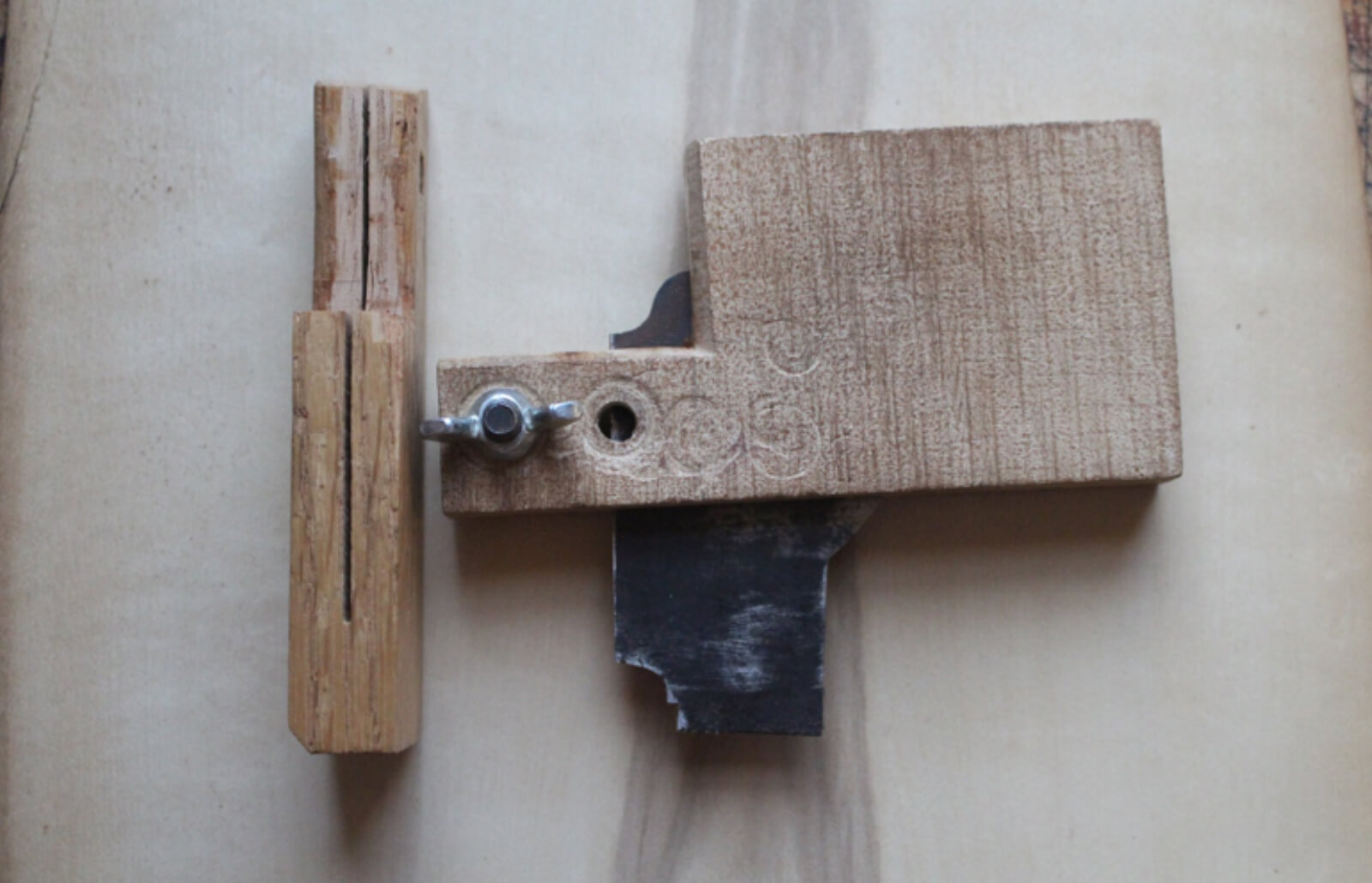 For curved moldings like those on a swan’s neck pediment on a highboy, for instance, I’ll carve as much of the molding as I can and then custom grind a scraper to take the facets off and create a perfect surface. 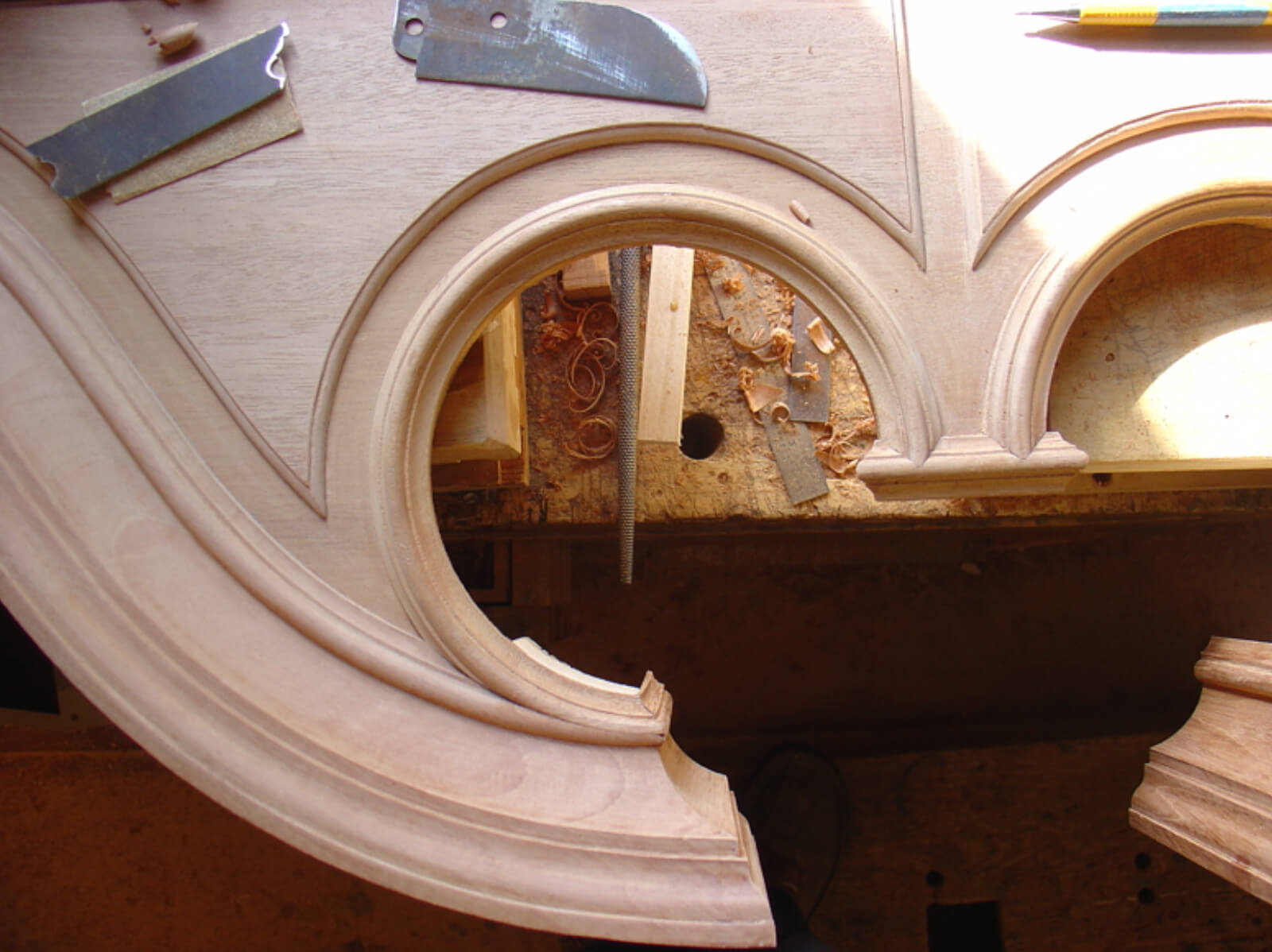 I make a scraper for each part of the molding. Don’t try to make one to do the whole profile- it will be impossible to push. If there’s a mitred molding that merges with the cornice, you can use the scraper from that section on the lathe faceplate and make an exactly matching curved molding. This is also very handy when turning the molding for a clock hood pediment, but remember that the return mitre to the side pieces will not be a 45 degree cut- it’s some odd number that I find with the Breed Simple System: hold one piece of molding over the other and mark the overlap then connect the points with your cut. This avoids any mathematical calculations that the Simple woodworker might want to avoid. Be careful when using a scraper on molding spinning on a lathe faceplate. I rough the profile out with turning gouges and scrapers and then take off small bits with the scraper on the tool rest held in a pair of visegrips or a handscrew clamp. In this situation, as well as with some nasty curly wood, or end grain, you can wet the wood with a sponge to soften it up before scraping. I’ll use a scraper to smooth the end grain of the blocks on a block-front chest after wetting the grain.

I’ve been avoiding the subject, but here’s my method. For rough work, like the bench scraping with a two-handled scraper, I just grind the edge on a fine wheel and use that burr right off the wheel. It will cut great and is plenty fine for such a purpose. For finer work like scraping the dried hide glue off of veneer or cleaning up cross grain joints like mitres I will file the edge with a pretty fine mill bastard file at 90 degrees and then put a burr right on that edge. A block on the bench holds one end of the file while the scraper is clamped at the same height. To stone the edge I use the same process. 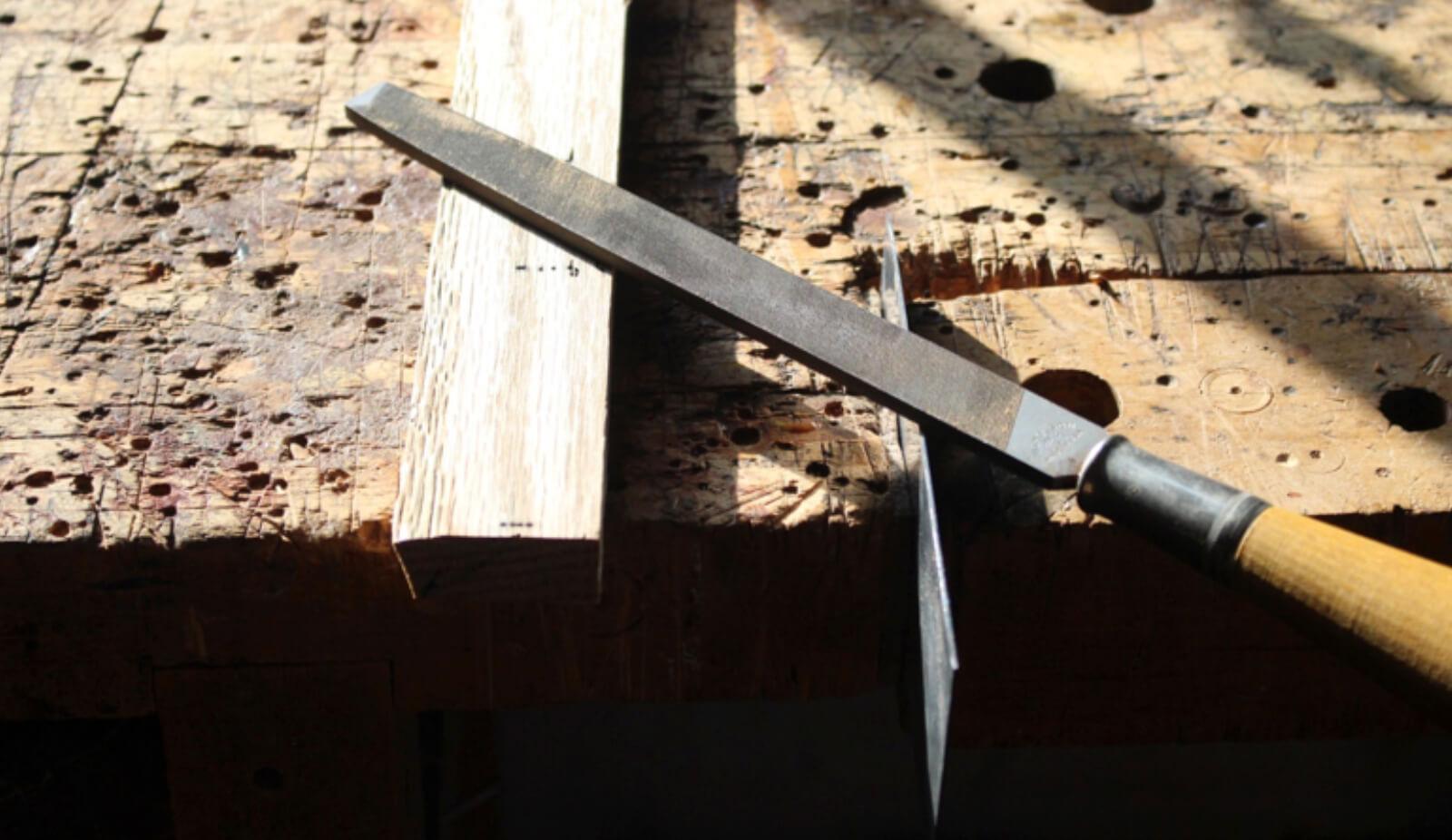 For finest work like the blockfront draws and scrapers that are ground to make beads and moldings I will file the edges and then clean them off with a 1200 grit water stone on both the working edge and the flat sides, then put the burr on. Fine waterstone shaped stones can get into the tight places on molding profiled scrapers. Ceramic stones are good for this also.

Triangular burnisher is at bottom. Above is a custom square scraper used to clean the insides of Chippendale chair splat piercings. First I’ll work it flat on the flat sides of the scraper. This does something magical to make the edge better. Then I’ll burnish the working edges with a bit of oil on the burnisher at about 3 degrees with a sliding motion away from the edge as I’m travelling down the length of it. DO NOT lean hard on the burnisher. I just measured it and it came to 3 lbs of pressure. After the 3 degree pass I make another at about 1 degree. This, in my imagination at least, pushes the burr out a bit farther, but does not curl it over any more, so it lasts a bit longer. The blade should cut at a very vertical angle. If there’s too much curl in the burnish you’ll have to bend it way over to cut which makes it hard to hold onto. A good edge will create shavings, not dust, although some softwoods like pine just don’t scrape well.

Most of my flat work is planed and not scraped at all. I use the scraper mostly to clean up contrary grain if needed, usually in mahogany, or to smooth birdseye or tiger maple after planing. The majority of my scraping is using profiled edges to create molding. In either application, the scraper is indeed Mighty. I’d be lost without it. 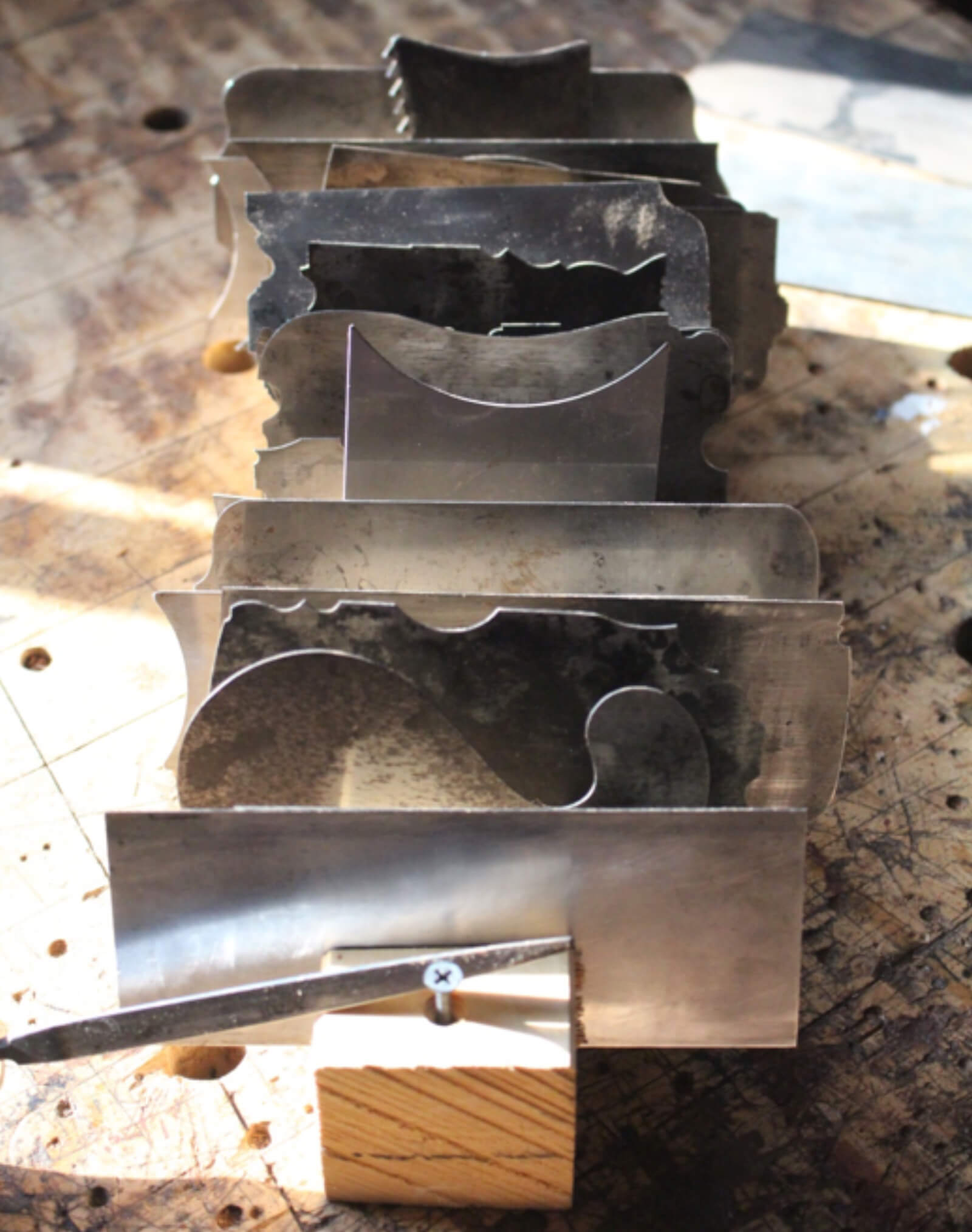 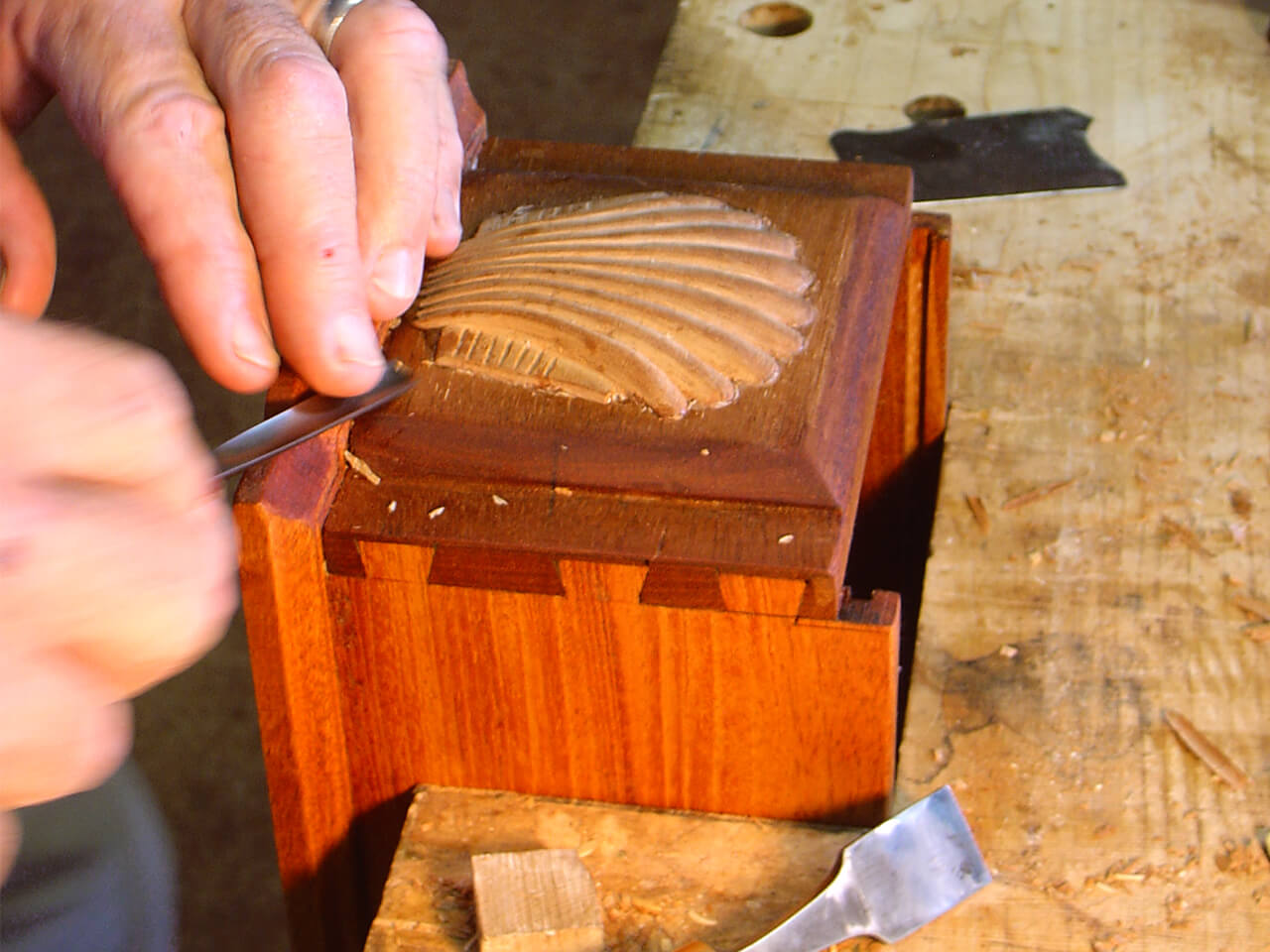 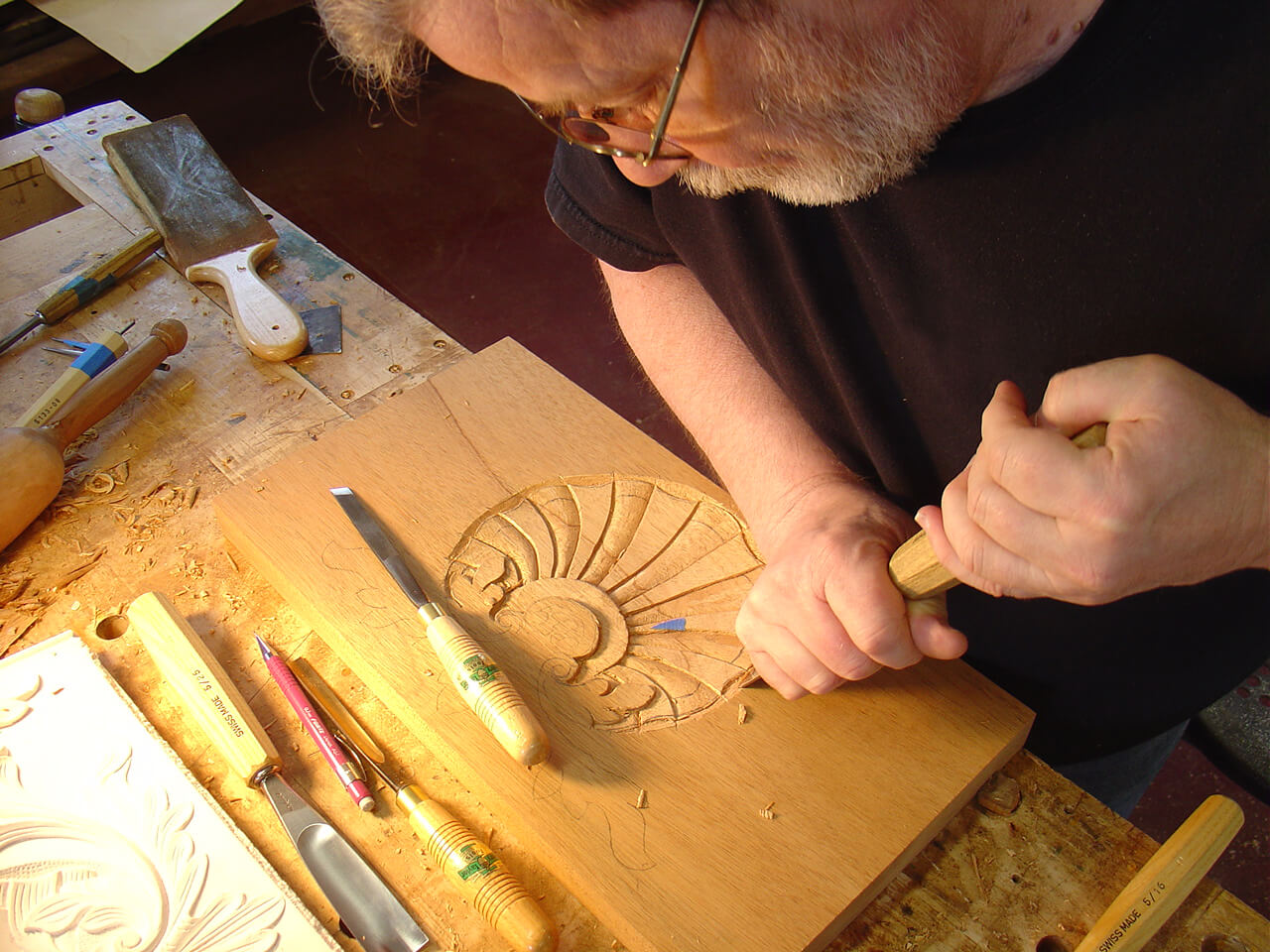